Why Weren't We Told

you’re interested in the complex and conflictual history between white settlers and Aboriginal Australians.

you are resistant to considering a version of Australian history that conflicts with what you were taught at school.

it fights prejudice with knowledge. While it may not be therapy in a traditional sense, it expands perspectives and generates empathy and understanding. This is achieved by explaining why many Australians are ill-informed about colonial history and
how the racial tensions that still exist were formed. It also offers a way forward—recognition of our violent past enables a shared history, and the opportunity for a shared future.

If you haven’t yet read Australian history that explores the complex and conflictual relationship between white settlers and Aboriginal Australians, this book is an ideal place to start.

Henry Reynolds grew up in Tasmania, attending school in the late 1940s and early 50s, and then completed an honours degree in history at the University of Tasmania. During this entire educational period, the subject of Aboriginal Australians came up only a handful of times.

Reynolds’ understanding of Aboriginal history largely related to the Tasmanian Aboriginals, who were represented as the dying remnants of a stone-aged people. This ‘dying out’ of Tasmanian Aboriginals was proposed as the natural result of exposure to modern civilisation—its diseases, its vices and its pastoral ambitions. The advanced weaponry and resulting massacres were viewed, in a very downplayed way, as an unexceptional result of the general process of colonisation.

In 1965, Reynolds was offered a job teaching history at Townsville University, and was unexpectedly confronted with an entrenched state of racial enmity in a contemporary context. He and his wife became involved in ‘doing their bit’ to help the Aboriginal inhabitants of the town, and experienced the difficulties this stance entailed. Reynolds’ experiences also led him to begin research into Aboriginal history, despite the subject being considered of little relevance at the time.

Reynolds found that a lot had been written about Aboriginal massacres and their ‘necessity’ during the 19th century. Then, as the age of humanist philosophy came to prominence in the early 20th century, the story about Aboriginal people changed. As an emerging nation, the treatment of Aboriginal people was suddenly perceived as shameful—not a story that would garner unity and pride.

Emerging history books replaced the truth of settler / Aboriginal conflict with a false construct of peaceful pastoralism. Decades of Australian children were taught a version of history that left out the harsh realities of the early colony, and collective amnesia ensued.

The last part of Reynolds’ book discusses the emergence of Aboriginal land rights in reference to Mabo and Wik court decisions—exactly how they came about and what they mean. He also discusses contemporary race politics in Australia, outlining the ways in which contemporary attitudes have been shaped, and what is required for a different and fairer future for the first people of this land. 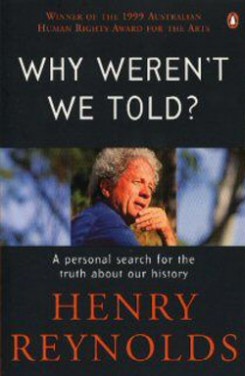