you enjoy the sort of self-help book that examines complicated psychological issues with depth, and offers personal, relatable anecdotes.

you’re looking for a self-help book with a simple methodology and straightforward exercises.

The intended audience for this book is anyone who is interested in positive psychology and self-development.

conversational and anecdotal. The author presents complex ideas in a coherent and persuasive manner.

it clearly explains how resilience can be developed, even in the absence of robust, psychological foundations. It also examines a diverse range of common issues, including job loss, drug addiction, overeating, depression, and being diagnosed with an incurable disease.

The Undefeated Mind by Alex Lickerman is an impressive addition to the self-help genre. Its methodology is partly based on the principals of Nichiren Buddhism, partly on scientific research in the field of psychology. The author also draws on his own experiences and his experiences as a general practitioner. In fact, most of the chapters are built around a particular difficulty that one of Lickerman’s patients is having, and by showing the approaches he has used to assist them, along with the patient’s own journey, he illustrates strategies for overcoming particular life problems. Lickerman also uses his own struggles and realisations to demonstrate various points.

The subtitle of the book is ‘On the Science of Constructing an Indestructible Self’, and it really does provide a clear and comprehensive method for developing resilience. I generally dislike texts that promote resilience, as the proposed actions seem to be a closed circle. If you had the underpinnings necessary to use the strategies you would probably already have a degree of resilience. This book, however, seems to offer genuine pathways towards resilience.

The Undefeated Mind discusses profound issues such as the inevitability of suffering and the importance of pursuing a life with purpose. It also examines ways of constructing meaning from experiences of adversity. Alex Lickerman is a scholar who is well versed in the field of psychology and he uses evidence-based scientific research to back up his assertions. The book is meticulously footnoted, so that the reader can continue their own research or appraise the works he references.

‘But the true victory didn’t come until years later, sometime after I’d begun working as a primary care physician at the University of Chicago, when a medical student came to see me one day distraught over having failed her third-year rotation in internal medicine. Hoping to encourage her, I decided to divulge the story of my own failure. And as I told her what had happened and watched her expression shift from despondent to contemplative and then from contemplative to resolute, I felt my shame over having failed Part I of the National Boards finally evaporate. Only because I’d failed, I realised, was I now in a position to offer someone else who’d failed in a similar way that most critical of psychological nutrients: hope.’

‘The answer [Buddha] found wasn’t, contrary to what many other forms of Buddhism suggest, that suffering arises from the frustration of our desires. Rather it was that suffering arises from our deluded thinking about the nature of life itself—specifically, from our deluded belief that we lack the power to overcome the obstacles that confront us; we suffer because we face obstacles we don’t believe we can overcome. Even the state of continuous suffering—clinical depression—is considered to result from our being overwhelmed by a feeling of powerlessness.’ 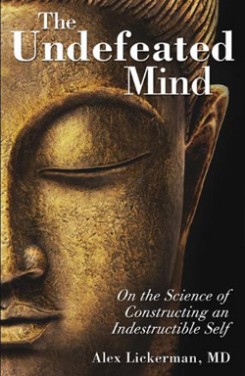