The Fault in Our Stars

you enjoy young adult fiction, and / or fiction that examines profound issues in a relatively light and humorous way.

you’re not open to the idea of a book that has sentimental moments and might make you cry.

sophisticated at times, simple at other times. Thoughtful, deep, funny.

through the vehicle of a romance between two teenagers with cancer, John Green discusses the deeper issues that face everyone — death, meaning, love and suffering. He also brings the world experienced by young people with debilitating illnesses to a mainstream audience.

‘Sometimes, you read a book and it fills you with this weird, evangelical zeal, and you become convinced that the shattered world will never be put back together unless and until all living humans read the book. And then there are books like An Imperial Affliction, which you can’t tell people about, books so special and rare and yours that advertising your affection feels like a betrayal.’

‘His mom sat down next to me. “I just love this one, don’t you?” I guess I had been looking toward the Encouragement above the TV, a drawing of an angel with the caption Without Pain, How Could We Know Joy?
(This is an old argument in the field of Thinking About Suffering, and its stupidity and lack of sophistication could be plumbed for centuries, but suffice to say that the existence of broccoli does not in any way affect the taste of chocolate.) “Yes,” I said. “A lovely thought.”’

‘“Sometimes people don’t understand the promises they’re making when they make them,” I said.
Isaac shot me a look. “Right, of course. But you keep the promise anyway. That’s what love is. Love is keeping the promise anyway. Don’t you believe in true love?”
I didn’t answer. I didn’t have an answer. But I thought that if true love did exist, that was a pretty good definition of it.’

‘… “Do you know,” he asked in a delicious accent, “what Dom Perignon said after inventing champagne?”
“No,” I said.
“He called out to his fellow monks, ‘Come quickly: I am tasting the stars.’”’

‘I was thinking about way back in the very beginning in The Literal Heart of Jesus when Gus told us that he feared oblivion, and I told him he was fearing something universal and inevitable, and how really, the problem was not suffering itself or oblivion itself, but the depraved meaninglessness of these things, the absolutely inhuman nihilism of suffering. I thought of my dad telling me that the universe wants to be noticed. But what we want is to be noticed by the universe, to have the universe give a shit what happens to us—not the collective idea of sentient life but each of us, as individuals.’ 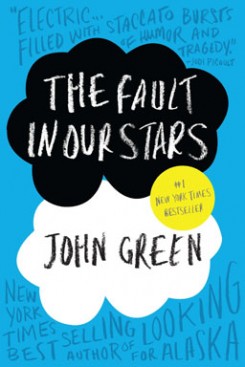