Songs of a War Boy

you’re interested in the astounding personal history of a Sudanese-born Australian who experienced the brutality and indoctrination of war as a child.

you can’t stomach accounts that detail suffering and violence.

Warfare from the perspective of a child and young teen
The history of South Sudan, particularly its recent history
The experience of migrating to Australia as a refugee
The development of self identity
Overcoming adversity
Resilience and hope

The intended audience for this book is people who are interested in current world affairs or personal histories about overcoming adversity.

it expresses in dispassionate detail a life of deprivation and bloodlust that clearly demonstrates how and why the child soldiers behaved the way they did — it establishes how an experience we probably consider unthinkable would have been ours, had we been born in that time and place. It’s also a moving account of a compassionate and thoughtful individual who has learned from his life experiences and who truly strives to make a positive difference.

Deng was seven years old when he, along with thirty boys from his village, was conscripted into the Sudanese People’s Liberation Army. The region where Deng grew up, along the banks of the Nile in South Sudan, had recently come under the protection of the SPLA, and each family was ordered to put forward one male child.

Many of the boys from his region died on their way to training camps in Ethiopia. Those that survived built a camp and began training as soldiers. A lack of food and medical care, along with outbreaks of disease, meant many more died. From the age of seven to thirteen Deng lived in similar camps, indoctrinated to believe that the only glory in life came from killing and being killed. When he was finally given an AK-47 he was deliriously happy.

His experience at the forefront of battle was short before he was injured, though most of his companions died. At a nearby medical camp he met a boy whose sister was married to Deng’s older brother, John Mac, and she had papers that would enable them to leave the war-torn region. Although Deng’s only wish was to return to battle, his brother convinced him to stow away on a truck and head to a refugee camp.

John Mac was tireless in his dedication to find a life outside Sudan for his family, and eventually he found a family in Australia who would support him. Deng’s early experiences as a refugee were very challenging, but slowly he adapted. His brother, however, despite exceptional efforts, was unable to adjust. John Mac returned to South Sudan and was killed defending his people and his land.

Deng was devastated by John’s death. Despite sharing his brother’s elemental connection to his people and his land, Deng’s experiences in Australia, and particularly his degree in law, meant he no longer wanted to be part of a society where power and money and guns invariably defeat the rule of law. Deng Thiek Adut has chosen to dedicate his life to fighting injustice and advocating for refugees, in honour of the memory of his brother, John Mac.

‘The Sudanese People’s Liberation Army needed manpower. It would be unthinkable to bring women into the war, and the elderly would even last the journey to the SPLA bases, but the boy children could pull the trigger of an AK-47 almost as well as their uncles and fathers. They could be groomed for extreme loyalty also, and they would not baulk at some of the aspects of fighting that men could not stomach.’ 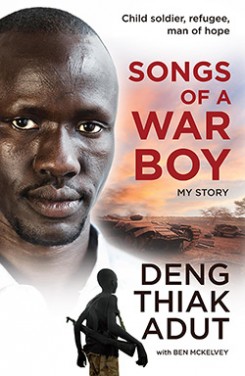