All That I Am

you’re interested in the lives and ideas of  German-Jewish intelligentsia in the 1930s, and the experiences of German refugees in England during this period.

Anna Funder has created such vivid, heroic characters in Dora and Toller, and the discussions of ideas from the 1930s are still relevant today. It also provides deep insights into a fascinating period of history.

The intended audiences for this book are literature graduates and those interested in German politics and culture during Hitler’s rise to power.

‘Dora had a sense of purpose so profound that when I was with her it was impossible to feel lost. Her presence reduced my demons to pathetic things, impractical and bad company, which would go away if I ignored them and focused instead on the task at hand: the book or play, the speech or cause or trip. She would say, “It’s not about you, remember, it’s about the work.” Dora thought I clung to my self-doubt, my edge-of-despair insights, as if they were the outward signs of deep artistic integrity — confidence and equanimity, after all, not being characteristics of genius. It stung a little, but I was grateful to be saved by her. At least half of what we call hope, I believe, is simply the sense that something can be done.’

‘We had never lived together. Even in her brief, friendly marriage to Walter Fabian, Dora had kept her own apartment in Berlin. Her need was visceral — the space of an only child — but it was also a political position. Dora’s view was that working women were trapped by ridiculous domestic expectations which, as she put it, “link their moral virtue to the state of their flat.”

I remember vividly a socialist congress in Hildesheim where she gave one of her signature addresses, telling the movement it needed to “liberate half of humanity from the endless trivia of the household.”’

‘Toller had no small talk, no register for Bekannten — acquaintences. He would fix you with those dark eyes, for slightly too long. His only mode, with everyone, was intimacy. Women loved him for it. He bypassed all the agonising repartee, the uncertain negotiations of flirtation, and spoke as if he knew them, had already been inside them. Who wouldn’t give themselves, wholly and fully, to a man who might at any minute sacrifice himself to save the world.’ 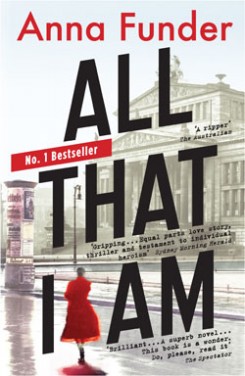